Making it in mainstream media

I don’t have much to say here, but there’s a pretty cool diabetes blogger being featured at the Discuss Diabetes site today. You might know him. Check it out!

In exchange for my participation in today’s article, Sanofi treated me with kindness and friendship. Nothing more.

My diabetes life has been kind of boring lately. So with my most recent supply order, I decided to get one box of something different. Y’know, mix it up a little.

Does that make any sense?

I should Probably thank Rachel for the inspiration for this post (Lord knows I’ve been short on it lately, exhibited by my sparse blogging as of late). And, depending on the response I get from you folks, perhaps I should thank her for inspiring me to do something that will be good for my health long-term.

But anyway. here’s the confession: I don’t have a so-called “primary care” doctor.

In fact, I’ve only had one PCP in my entire life. He was young and naive when I started seeing him. I was one of his first-ever patients, and my propensity to pee without discretion (as babies often do) was a quick lesson to him in why he should leave the expensive silk ties at home. He was a smart guy though, which is evidenced by the fact that, six or seven years later, he postulated diabetes when – even today – many pediatricians would dismiss the symptoms as “nothing to worry about”. But Dr. Goldman was a pediatrician, and by the time I reached college age, that waiting room filled with wooden blocks and colored beads on a twisty wire just didn’t appeal to me anymore. So I told my mom that I didn’t want to go back. She understood.

END_OF_DOCUMENT_TOKEN_TO_BE_REPLACED

This post started out as a reply to “Tell Me About Your JDRF Walk” on Arden’s Day, but (in my typical fashion) rambled on and on until it warranted a blog post of its own. And seeing as how I’ve been kind of light on material lately, why not find my blogging inspiration from another blogger? (who has an awesome first name, by the way!!)

To be honest, this year will only be my third walk. I didn’t do any diabetes walking, or any fundraising at all for that matter, in my first 29 years of diabetes. But in the 30th year, I learned that a neighbor in my new neighborhood had T1 and would be walking, so I joined her team. Part of it was about being neighborly. Part about it was curiosity. Part of it was looking for people to socialize and connect with. And yes, I figured it’s time I do something (other than hope) to help us achieve diabetes nirvana.

END_OF_DOCUMENT_TOKEN_TO_BE_REPLACED

As I write this (Tuesday night), I’m down to my last nine Bayer ContourNext strips.

You may remember my saga with the test strips, and insurance battles, from my last post. 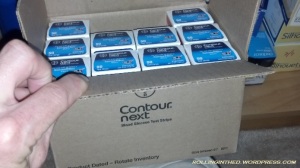 Actually, that’s not quite accurate. I’ve got 22 unopened boxes of strips (for a total of 1100 fingerstick tests; or if you play by the rules, 1078 fingerstick tests and twenty-two control-solution tests). I’ve also got a return-label to send those strips back to Edgepark, and a standing prescription to get 22 identical boxes of strips from CVS Caremark. So I can’t quite open those boxes just yet, or it could cost me dearly.