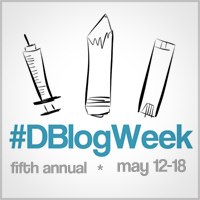 Diabetes really doesn’t affect me emotionally all that much – I’m just lucky that way. Sure, it does harbor occasional rousings of resentment, elements of embarrassment, and feelings of frustration (it may also be responsible for my overall timidness and reluctance to take chances in life – a connection I just realized this past weekend), but none of that qualifies me to really discuss the power of emotions that a faulty pancreas can deliver, and I don’t want to seem to trivialize the issue – which is a very real one. So I won’t even try.

But that’s not to say there isn’t stress in putting myself out in public, on the internet, for the world to see (or read).

END_OF_DOCUMENT_TOKEN_TO_BE_REPLACED

This was one of my favorite parts of the Forum.

* * *
Disclosure: Medtronic provided the transportation, hospitality, and the Tweet. I provided the thoughts (uncompensated). But you already knew that.

Warning: This is one of those posts where I’m going to dig deep inside of my head, grab a collection of thoughts, and try to make some sense of them. It’s completely unstructured, and as I start typing, I have no idea how it will end. My grade-school English teachers hate that sort of stuff.

It’s about advocacy. Or more specifically, being an advocate.

It’s a word I struggle with all the time. I can’t quite understand what it means or what obligations come with the name. Is it a role that a person chooses? Or is it a title bestowed by others based on how he or she is perceived?

Is it a privilege? A responsibility? An achievement? Maybe it’s just a self-proclamation — a sash that anyone can pick up at their local 99-cent store and sling over their shoulder. (Before you ask: I’ve never actually seen a sash that reads “Advocate” — it’s just a metaphor, and a poor one at that. But it does give me an idea…).

The term gets tossed around a lot and, to be honest, I’ve been reluctant to include myself in the group. The reason I came to the ‘net to talk about diabetes was simply that — to talk. To exchange thoughts and ideas with people like me on-line, because I really didn’t know of other Type-1’s off-line. I sought companionship and understanding, and maybe an exchange of some tricks-of-the-trade along the way.

When I sought my way into this online community, my goal was to become one friend in an established circle of friends. That was expectation, and to some extent, I’ve accomplished that. Saving the world was never on my mind.

Doing anything on a grand scale was not my ambition; I’m the type who tends to avoid the spotlight, not attract it. Never did I consider myself an Advocate.

END_OF_DOCUMENT_TOKEN_TO_BE_REPLACED

What’s in a name?

The “Medtronic Minimed 530G with Enlite” has got to be the longest, most convoluted name for an insulin pump. Within the first moments* of the Medtronic Diabetes Advocates Forum**, I sent out this tweet:

** A peculiar name for the forum given that Bayer was also a host – in absentia. But a wordy name like “Medtronic Diabetes Advocates Forum presented by Bayer Diabetes Care”, although not unprecedented, would have been downright laughable.

Why did they call it that? Because “Medtronic Minimed 530G with Enlite and Bayer Contour NextLink Glucose Meter” would have been too cumbersome.

END_OF_DOCUMENT_TOKEN_TO_BE_REPLACED

I’d never been invited to anything before as a result of my participation in the DOC. So when the Direct Message came early in December, after over a month of silence on this blog,  I was a bit intrigued.

“Hi Scott – what is your preferred email address? I’d like to invite you to an event Medtronic is having,” it read, signed by one of the company’s PR folks whose name we see around the web. Naturally, a bunch of thoughts filled my head.