Can I afford it? (#itmakessense…)

On the way home from work Thursday, I decided to stop off at my favorite convenience store for a cup of coffee.

While waiting on line to pay, a sign taped to a cardboard box caught my attention. In a large attention-grabbing font and with explosive graphics (and Easter eggs), it read: “REESE’S PEANUT BUTTER EGG — 50% OFF”.

END_OF_DOCUMENT_TOKEN_TO_BE_REPLACED

If you looked at my file in my endo’s office, you’d see that I do a pretty good job at taking the right amount of insulin to cover my meals. Not “very good” or “excellent”, but pretty good. On a scale of 1 to 10, maybe I’d be a 6 or 7.

So, what would you say if I asked you which of the following statements were true?

END_OF_DOCUMENT_TOKEN_TO_BE_REPLACED

#dblogweek – Day 3 – One thing to improve

For the next week, I’ll be participating in the 3rd Annual Diabetes Blog Week (for more info, click on the banner above). Each day, D-Bloggers will be (mostly) blogging about a common topic but offering their own perspectives.

Haven’t I done enough?  You mean I have to do even better?   Today’s blog week topic is to find one thing that I can do to improve myself.

If there were just one thing, and then all my problems would be solved, trust me, I’d be doing it.  But there are lots of things I should be doing better.  And most of the time, when I’m not being The Perfect Diabetic, I know it.  I’m not overtly defiant (mostly), but I know when I’m bending the rules a bit, and acknowledge that I’m going to pay the price for it later.

END_OF_DOCUMENT_TOKEN_TO_BE_REPLACED

Bread as my benchmark

I stink at counting carbs.

When the Big D first shot it’s arrow through my pancreas in 1981, I left the hospital with a strict exchange diet.  Most meals were two or three bread exchanges (depending on the meal), one or two meat exchanges, and one fruit exchange.  There were some vegetable exchanges and fat exchanges in the plan too, which I never really counted too closely.  The Exchange Diet was kind of like the Richard Simmons Deal-a-Meal plan.

The fruit exchange was a fast-acting and sweet-tasting part of the meal, put there so my blood sugar wouldn’t crash after an injection before the meal had time to work.  In hindsight, that reason wasn’t very credible, considering I ate the fruit at the end of the meal as dessert, and that the Regular insulin took forever to work to begin with.  But that was the conventional wisdom at the time.  (1 Fruit Exchange = a small apple, an orange, twelve grapes, two plums, or half a banana)

But the most interesting and challenging of all was a bread exchange.  Quite simply it was, a slice of bread (or if anyone was counting, 15 carbohydrates) – or to complicate things, something equivalent to a slice of bread: like some measurable amount (which I can’t remember) of mashed potatoes, ½ cup of Cheerios (or something like that), or exactly twelve potato chips.

END_OF_DOCUMENT_TOKEN_TO_BE_REPLACED 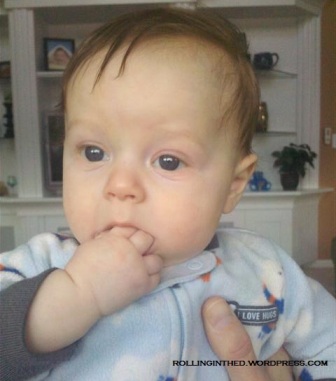 I know… two days of baby pictures is too much. It won’t happen again. I promise.