UHC+MDT: A chain of thoughts

I am, for the most part, not an emotional guy when it comes to diabetes.  It’s something I’ve got and something I need to deal with. There’s no point in whining or complaining, because that doesn’t help.

Perhaps that’s why I’m so confused by the wave of emotions and thoughts that come to mind over the recent UHC/Medtronic development.  Perhaps I don’t do well with emotion. Perhaps I don’t understand it.

This post is NOT going to be about how wrong that decision is, or how people deserve better, or anything like that.  This post is going to be about everything that I’ve been thinking and feeling since hearing this news, and how I’ve tried to understand and make sense of it all. My hope is that, in writing it, I discover some clarity myself – and maybe I’ll impart some knowledge or thoughts along the way.

Just a few weeks ago, I, along with many others, was an invited guest at Medtronic’s headquarters. Our hosts made a big point to show how they are shifting their focus to one that is patient-centric.  The “bully” of pump companies was, in effect, becoming a kindler and gentler Medtronic.

2. Maybe it makes sense. All pumps are, essentially, the same.

When it comes to treating people’s health, glitz and glamour doesn’t matter. The differences between various manufacturers’ pumps are not that great.  Some have buttons; some have colors; some are touch-sensitive; some communicate directly with meters and/or CGMs so you don’t have to. But in the end, they all deliver insulin in more or less the same way. So, unless someone has particular needs (not the same as wants) for reasons such as vision impairment, high insulin needs, or very low-dose precision, does it really matter?

So, if we accept the thought that the differences between pumps are largely superficial, and that the exclusivity is purely price-driven, I ask…

The percentages are hypothetical and purely for the sake of discussion. But if this drives the price down to the point where everyone (under UHC coverage, for now) can get one, is it worth it? Being in the former 50% category today, I’m satisfied with the way things are. But that’s a rather selfish standpoint to take.

4. Should I even be angry? Though I am covered under UHC, I have freely chosen to use Medtronic for the past ten years, and all signs (prior to this week) point to me selecting Medtronic again.

I hate getting angry for the sake of getting angry. In many cases, there’s really no point in making a scene. This really doesn’t matter to me.

5. It was about this time last year when Medtronic finally “convinced” United Healthcare that the 530G with Threshold Suspend was indeed beyond “experimental” and should be covered. Coincidence?

I didn’t believe then that it was a matter of convincing, rather a matter of negotiating. And I certainly don’t believe it now. The terms of this agreement were put in place a year ago, right? I’ll bet UHC just needed to let the terms run out on its other contracted companies before they could go full-throttle with this one. Knowing – or even thinking – that this has been going on right under my nose makes me extremely resentful. It also helps to clarify….

6. Who should I be mad at? Is United Healthcare to blame? Is Medtronic to blame? Both?

Lots of folks have told me that Medtronic engaged in this deal simply as a business decision, to expand distribution of their product. They tell me that if Medtronic hadn’t negotiated prices low enough to be UHC’s exclusive supplier, then someone else would have. They tell me not to be mad at Medtronic.

Meanwhile, United Healthcare has been very good to me for a very long time. I’ve been under several different medical plans underwritten by several different employers since finishing college and going on my own medical plan, and every one of them has been administered by UHC. Considering all the gripes that people have had with insurers, I see UHC as one of the good ones.

But times change, and these backroom negotiations do happen – and they are sleazy. As for the people conducting these negotiations…

7. I’ve got friends in low places. I don’t want to hurt them.

A college buddy of mine works for United Healthcare. Through my activity in the DOC, I’ve gotten to know folks at Medtronic Diabetes on a first-name basis. I work hard to maintain these relationships, and try to build new ones.

The communications folks at MDT are in a really difficult place right now. I feel bad for the task they are up against. They didn’t cause this to happen, yet they are left to pick up the pieces. And in the midst of all of this unfolding, my UHC friend posted a rainy-day photo of his office – corporate logo on top – on Facebook.

And I exploded.  I lashed out at Medtronic Diabetes and at UHC all over social media.

I feel really bad for the people on the other side of those lashes. I love those people; I really do. My moral conscience is torn between sticking up for my friends and sticking up for what’s right.

What is the underlying premise that makes UHCs and MDTs actions so wrong?  This is not about choice. This is not about diabetes. This is about insurers playing doctor, and choosing the best treatments based on financial, rather than medical knowledge. The problem extends well beyond insulin pumps and well beyond diabetes. Perhaps some folks in our community have relationships with other medical communities (via HealtheVoices, for instance) and can get some anecdotes.

Because there’s no way in hell the insurers are going to be shamed into fixing it themselves. I know this because…

9. United Healthcare is full of crap

In his Happy-Medium blog, Stephen dug up (I urge you to visit that site to read his thought) the “Mission Statement” of United Health Group, UHC’s parent company.

“We seek to enhance the performance of the health system and improve the overall health and well-being of the people we serve and their communities.”

“We work with health care professionals and other key partners to expand access to quality health care so people get the care they need at an affordable price.”

“We support the physician/patient relationship and empower people with the information, guidance, and tools they need to make personal health choices and decisions.”

Or, to paraphrase (in my words):

We are the biggest bullshit artists around, and we’ll say whatever it takes to get people to like us, but when push comes to shove, we always win! MUAHAHAHA!

Now, I’m sure that someone at UHC will try to defend their actions, saying that the Affordable Care Act is causing them to lose tons of money and that sacrifices need to be made in order to keep afloat.

But this picture tells a very different story. 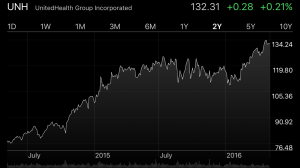 10. We are all just guinea pigs in a sick, sick game

The truth (or what I perceive to be the truth) finally came to me as I was reading the Storify coverage of the event put together by DiabetesMine.

Particularly, it was this paragraph – a quote from a spokesperson, and (hopefully) still a friend at MDT, that made it click:

“In addition, our two companies will work together to help advance diabetes care and find new ways to analyze the total cost of care for diabetes management, including how advanced technologies and patient support can improve individuals’ care plans. We aspire to bring a value-based approach to diabetes care that tracks clinical outcomes for UnitedHealthcare members on insulin pumps and places greater focus on quality rather than the volume of care delivered.”

During the Diabetes Advocates Forum, there were some recurring themes that seemed odd in their ambiguity. The buzzwords were: Data. Partnerships. Better Diabetes Outcomes.

Data was a big thing – they’ve been talking a lot about data, and even hired a data-guru executive to lead the effort, but they were never clear on how it would be used. They were going to pull data from all over the place to reach all sorts of groundbreaking conclusions. One such conclusion, for which they already (apparently) had evidence, is that pumping is, overall, cheaper than MDI.

Over several years and all other things being equal, total costs (pharma+doctor) for patients on pump is less than that on MDI #MedtronicDAF

Now I see where they are going with this.

This is all speculation on my part, but if I’m putting the pieces together properly, it makes sense:

Essentially, Medtronic is developing a comprehensive medical profile on us. They’ll study how Threshold Suspend affects the number of times the ambulance is called. They’ll look at how often a patient receives (and submits a claim for) an A1C test, and how the frequency of A1C tests does or does not affect a patient’s blood sugars. They’ll look at the total costs of pumping, including supplies, prescriptions, and labwork, and compare them to UHC’s databases on those who don’t use pumps.

I’m not sure how far they will take this, or how far HIPAA will allow it. But it’s all becoming crystal clear to me.

This isn’t about saving money. This is about gathering subjects for a massive data research project.

Perhaps the research will prove valuable.  Perhaps not.

But I didn’t sign up for the study. I wasn’t recruited.

I deeply resent that.