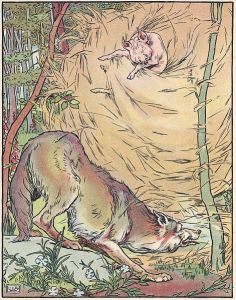 Once upon a time, there was an old sow with three little pigs, and as she had not enough to keep them, she sent them out to seek their fortune.

The first little pig, with neither an abundance of thought or foresight, built a home quickly, cheaply, and without any specialized tools, using the simplest and most plentiful material he could find  — straw. This pig couldn’t be bothered to rationalize what consequences a house of straw might bring, he was compelled to pursue the simplest path, unless and until that path were proven to be ineffective.

Well, despite his low home-ownership costs, that pig ended up spending lots of uncomfortable time and money in the veterinary hospital. Caring for a victim of a wolf-attack is no small matter. Not only are there lesions to disinfect and wounds to stich up, but there is a generous dose of painkillers and antibiotics to be administered. And let us not forget rabies. There’s a chance the wolf has rabies, and the pig needs to be inoculated, stat.

After being attacked physically and financially, the pig found himself facing another big expense. Because of his pre-existing history surrounding his domicile, his homeowner’s insurance had skyrocketed to the punitive category. Faced with these bills, the little pig can barely afford to re-build his home. But he does, exactly as he built his first, because it’s all he could afford and because a little protection is better than none.

Little pig number two, as we all know, didn’t fare much better.

The fable describes the third pig as the smart one. He put everything he had into his sturdy home and that it lead to lifelong security and happiness. Everyone, the story teaches us, should strive to be like the third little pig.

But that’s just a fairy tale. In reality, that lesson couldn’t be further from the truth.

It is true: the third pig built a more stable house out of bricks. He wisely invested in bricks and quick-drying mortar, a trowel, and a precision laser-level. He also hired a skilled mason. It cost him a small fortune, but it stood up to the mighty wind gusts.

Sadly, reality shows that a brick home isn’t available to everyone. In fact, the statistics in this story alone show that brick homes are simply out-of-reach for two out of three pigs. Or three out of four, if you count the sow.

But despite the affordability factor, the numerous injuries – and even a few documented fatalities – resulting from cheaply-built homes caused perception of a sturdy brick house to shift from a luxury to a necessity. Pretty soon, every pig was building houses out of bricks, whether they had the means or not.

Accessibility to bricks soon become limited and the competition to get them became fierce. After all, bricks are delivered on a wagon pulled by a large dog, and that dog was quickly becoming weary and irritable. Because of the untenable labor conditions, the dog started demanding a premium price for his bricks. He also became a real sonofabitch to deal with. But the pigs tolerated the dog’s attitude, billing errors, and circuitous automated phone-trees, because they had no other choice.

Next, the powerful bricklayers-union would take advantage of their newfound opportunity. They would become the “middlemen” between the customer and the supplier, developing alliances and using their size to negotiate fees. Though they were regarded as saviors, no one really knew who benefitted from those negotiations, because prices continued to rise.

Finally, the lion, a.k.a. the King (government) decided it was time to intervene. He would “fix” this problem by enacting home-payment assistance programs in the form of shared costs and low-interest-loans to help save the swine. Somewhat expectedly, he appointed a skunk to administer the program.

This opened the door for an unscrupulous smooth-talking cat to come along, and try to undercut the market with cheap import bricks. He won’t tell you where he got them, and won’t guarantee that they’ll withstand the forces of a wolf’s huff and puff. But he deals in volume, and that drives prices down.

Some pigs took their chances with this newer, cheaper brick; and others didn’t.

But the skunk had to impose fiscal responsibility on those who participated in his program by only offering government assistance toward the purchase of the most cost-effective materials.  Naturally, a competitive bidding process ensued, and an enormous amount of business was channeled to the smooth-talking cat and the unsafe bricks.

You can guess how this ends up.

But can you see what happened? This simple children’s story of the Three Little Pigs became so completely derailed, with all sorts of bizarre characters forcing their way into a narrative where they really don’t belong — frustrating others and lining their own pockets in the process.

And for what?  Everyone applied incremental patches to the system. Everyone inserted themselves somewhere in the process without consideration for how that would change the process itself.

Nobody bothered to look into WHY THE COST OF BRICKS WAS SO DAMN HIGH TO START WITH.

And that is where we are with healthcare in this country. We have all sorts of plans and programs that try to address HOW we manage and share the costs for our prescriptions, our supplies, and our doctor visits. We propose ways to defer and to share these costs. But is anybody looking for ways to reduce those costs in the first place?

That’s a real problem. The solution isn’t that hard to find….

More on this next time.

Hello from the outside. From the outside of the DOC.  It’s no secret that I’ve been an outsider lately. There are various reasons for that.

I’m not going to go into those reasons in detail, but one big reason is that any time a thought came into my mind regarding diabetes and I considered sharing it online, I’d ask myself “Why?”  Why do I need to tell a story that’s already been told?

There are plenty of folks who fulfil the role of inclusion, of solidarity, of showing people with diabetes that they are not alone.  I don’t feel the need to do that myself anymore; not at this point in my life. Nor do I need that reminder from others. Next month will mark 35 years from my date of diagnosis. I’ve met people on both sides of that milestone and I know folks like me are out there.

I am currently writing this while on a plane, flying back home from my second (and overall, the fourth) Diabetes Advocates Forum (affectionately known as #MedtronicDAF). Frankly, I found it peculiar that I was invited again, considering my absence from – and arguably my neglect toward – the Diabetes Online Community.  As I wrote the last time, I hardly consider myself an advocate to begin with. Not even an advocate-wannabe. But I accepted the invitation (expenses paid, thoughts my own, yadda yadda), and WHILE I was there, I learned WHY I was there. Sort of. But I couldn’t put it in words.

But Amanda, who’s in charge of Medtronic’s external communications and is the mastermind behind the event (she has a formal title and last name, but neither are germane to this discussion) – along with her hardworking staff – knew the reason. And while having dinner after the forum had concluded, she graciously introduced me to Brian. Brian is one of the chief CGM development engineers (again, not too big on titles).  Patrick, another talented lead engineer, was also in the discussion.

After gravitating from specifics, we spoke more generally about the need to approach any design by first identifying an unmet need.  Abstractly, without bounds, and without prejudice toward a particular technology or existing method. Engineering and problem-solving is in my blood and I found this discussion fascinating. Most readers probably find this engineering process dull, however, so I won’t elaborate on it.

There is great value in specific challenges that patients/consumers/PWDs/etc (take your pick) encounter and bringing them to the surface. The DOC does a great job of that. And there is also an absolute justification in voicing those concerns and demanding “I’m your customer. Find a solution and make it happen.” I read it often, and heard it often at the forum.

But in order to achieve a personal feeling of accomplishment, that’s not enough for me. I find a need take those concerns and figure out the overall unmet need – from a perspective that likely doesn’t exist deep in the trenches of industry or government – and propose a solution. One that, hopefully, will reach the ears of those who are empowered to make change.

So, since we could only accomplish so much (read: not much) in one day of sessions in Northridge, California, I’ll have to do it myself. Or at least do enough to get the gears turning. It’s not enough to restate what we want achieved, I’ll push to provide guidance on how to do it.

I’ll rely on youse guys (remember, I’m from Jersey – “y’all” is not proper English) to amplify that message. You’re great at that, and I’m a bit shy when it comes to self-promoting anyway. But I’m going to attempt to craft those messages and solutions.

Perhaps they won’t be taken under consideration word-for-word. In fact, I’m sure they won’t. But if they get the discussions started and open up new lines of thinking, I’ll consider it a success.

This is how I can contribute to the Diabetes Community. This is my calling.

There is a noticeable evolution in Adele’s music from 21 to 25. I am – and this blog is – evolving as well. However, this blog’s title will remain as it’s always been, inspired by her song from four years ago. There’s still a fire burning in my heart, and it’s reaching a fever-pitch that’s pulling me out of the dark. Going forward, expect this blog to be different than anything you’ve ever read before.

Hello from the other side.