I’m right, and everyone else is wrong? 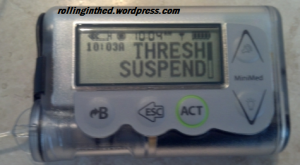 I keep asking myself why I feel this way about the Enlite sensor.

I keep telling myself that – despite the experience of others – I can get it to work to my satisfaction. I want it to work, I really do. Really, really, really.

Lots of times, it does. When my diabetes is behaving well and my blood sugars stay in a comfortable range (say, between 70 and 200 mg/dl), Enlite’s performance is fantastic. Awesome. Impeccable. And I’m happy – very happy – and I tell myself that I’m going to stick with it after my trial (disclosure) is over.

But then something goes wrong.

My BG drops down to 50, but the sensor struggles to catch up – if it does at all (it likely bottoms out at 70, maybe 67).  Or I underestimate my lunch (as I often do), and when the graph’s inclined slope begins to flatten out at 200, I feel like I’ve got it under control until my meter insists otherwise with a beep and a brightly-colored 270 mg/dl. One time, the sensor was DOI (dead-on-insertion).

Medtronic has given me a multitude of people to go to: my “trainer” (who taught me how to use the 530G and Enlite sensor), my “StartRight rep” (who is assigned to follow new users of the device over the first couple of months), the PR folks who offered me this trial (who are awesome, but PR won’t help me in times like these), and of course the random call-center rep whose phone rings at the 24-Hour HelpLine.

After a particularly starting (more accurately – and regrettably – “un-startling”) incident a couple of days ago, there are people at headquarters in California who are trying to re-create my “experience” to understand why device behaved the way they did.

To their credit, they’re trying – hard.  Really hard. They’re throwing dozens of hoops in the air, and I’m jumping through every single one of them.

When someone calls me back to discuss a particular issue, I need to stop them and find out just WHICH issue it is we’re talking about, because there are several.

I’m getting a bit dizzy and disoriented.

It’s all because I’m really trying to believe that this system can work for me, and that all the missed highs and lows, the Sensor Errors, the Motor Errors, and the first-day arbitrariness of it all can be fixed. There’s a glimmer of hope inside of me that says I don’t have to give up some of the awesome features that only the 530G and Enlite system has.

Now back to the title and first few sentences of this post.

I’ve asked who’s on trial here? quite a few times. And although I hope and believe my feedback will be valuable to Medtronic in the future, I’ve concluded that the point of this trial is for me to be able to try-before-you-buy, not for them to learn from me as a case-study.

Why am I insistent on trying to figure out if the system works or not? Lots of others have tried it, and plenty have offered up their feedback. Some also have used the Dexcom G4 and can use that as a comparison.

I don’t need to personally test-drive an Edsel to know if it’s right for me. The statistics surrounding that vehicle give a pretty clear answer.

And out of that last group I mentioned – those who’ve tried both Enlite and Dex G4 – every single one that I’ve heard from has ultimately chosen the G4. Every. Single. One. (If there’s someone who has preferred the Enlite, please let me know. I have so much to learn from them.)

And here I am, trying to force myself into a perception that I can feel comfortable driving an Edsel.

Why do I think I could buck the trend? Why do I think that My Diabetes May Vary to such an extreme that all of these other anecdotes don’t apply to me?

Why am I so unwilling to follow the lead of those who’ve learned before me? Why am I trying to prove to someone (the world? my doctor? myself?) that Enlite can be better – or at least “good enough”?

Why am I so stubborn to think that I’m right and everyone else is wrong?

Do I still believe that the Minimed 530G with Enlite, with its all-in-one form factor, its predictive alerts, its time-variable preset thresholds, its ability to backfill 40-minutes of missing sensor data, its fantastic CareLink reports, and the company’s relentless attempts to help might be right for me?