No one here but Mio

I guess titling this post with a lyric from a singer named Sting is a bit misleading. Because putting in my new infusion set didn’t sting at all.

In fact, when I finally inserted my first Mio set, I didn’t even know if I did it right. I had no idea if it went beneath the skin at all.

Here’s the thing — the directions that come with the Mio are pretty much useless. It’s a huge book with irrelevant words in fifty languages, and some crudely drawn sketches. Where are the three raised bumps to grasp to remove the cover? Which markings are the ones to hold the device and which to squeeze to plunge the needle?

Not having any trainer or Skype-buddies, I turned to YouTube. I went back and forth between two videos: one official Medtronic video and another PWD-made video on how to do the insertion. Neither were great (and there was one big contradiction between the two), but together I managed. I thought about seeking help via Twitter, but typing while I had this big thing stuck to my belly wasn’t going to work.

This is what the set looks like, by the way (it’s the spent casing which remains after you’re done, with the cover replaced):

The Mio, by the way, is the same as the Animas Inset, except for the way the tubing connects to the reservoir (the tubing comes already connected to the infusion site and is wrapped inside of that contraption).

I’m not a big fan of springy things that plunge needles through my flesh automatically. I’m more of a slow-poke when it comes to these things.

slow-poke \ˈslō pōk\ : A PWD who favors inserting syringes or infusion sets slowly and methodically, rather than with a quick jabbing motion or using an inserter device

So, for that reason, I found this self-contained contraption quite intimidating. But I overcame my fear of the Big Blue Senserter, so I convinced myself that I could do this. When you pull the white piece out from the  top, that flexes the white plastic and makes it want to spring into action, inserting the needle. (Since it’s only used once, I suppose flexed plastic is adequate for this purpose).

Here it is, upside-down from the perspective shown above (that took awhile to figure out. The removal dome-side is where the needle goes into the skin, the flat part is where you pull the plastic to arm it. 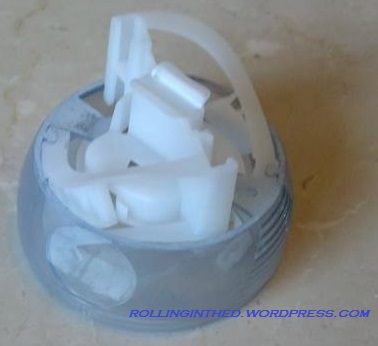 The needle is now retracted. 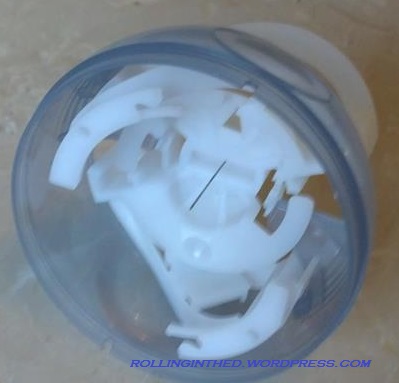 Keep in mind that this is a set that’s already been used, so the actual sticky part and the cannula aren’t there. But this is where the two videos I mentioned differ. The official directions have you filling the tubing and cannula, together, while the other video shows the tubing being disconnected and then primed in the same manner as a QuickSet. How he knows that the cannula should be filled with one unit is beyond me, which is part of the reason I chose not to do it that way.

Once you squeeze the two parts on the side — and I’m not sure if it’s the thumb indents or the raised lines (I think it’s the raised part), the whole thing goes in. This is where i barely felt anything and didn’t even know if it happened.

This profile view can give an idea of how deep (or not deep) the needle goes:

Compared to the Silhouette (aka Animas Comfort), it’s nothing; and I already like this set a whole lot more than the Sil.

At this point, you’re supposed to reach through the top of the doohickey and pat down the adhesive so it sticks. I couldn’t quite figure that out, so I hoped that a few gratuitous and randomly-placed taps would do it. Removing it was tricky too. How do I not rip the infusion set off at the same time? After checking a few online resources with this thing hanging from my belly, I gave it a try. Somehow, it worked.

Here’s the finished product. Not too impressive to look at. You’ll notice that the point where the tubing connects is slightly different than what the other sets use. I can only imagine that’s so it can go both ways (i.e., there’s no “upside-down”). 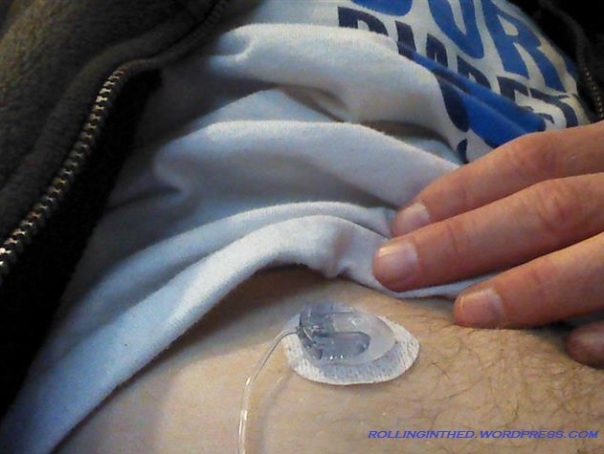 I haven’t used belly-sites for a long time; lately it’s mostly back-sites (with the Sure-T) and below-the-belt sites with the Sil (specifically for swim-days when I’m not wearing a shirt). But I think my back is developing a bit of scar-tissue, so I figured it’s time to try moving up front again. And you know what? I like this infusion set. Overall, It’s a lot more comfortable than the SIl, and after three (and a half, shhh!) days, doesn’t irritate as much.

The Mio, after removing it

It’s not perfect.  The new reversible connector makes it stand a little taller than, say, the Sil. But barely. And I’m afraid that cannulas that can fit a needle inside will make a bigger hole than a needle by itself (like the Sure-T) and may lead to faster scarring. So the taller profile will keep me from using it in my back; I’ll stick with the Sure-T for that (the infusion side of the Sure-T is virtually flat); and the larger diameter will keep me from using it all the time. But for belly-sites, where the previous Silhouette-caused scarring has virtually healed, this is my choice.

But as I write this, I’ve only got 3.6 units left in my reservoir, and it’s time for a change.

I’ve got boxes upon boxes of Sure-T’s and Silhouettes in my arsenal, and nine Mios. It’s back to the Sure-T for now. I’ve got to balance my supply. 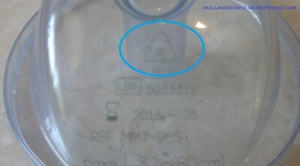 And meanwhile, I’ve got to figure out what to do with the shell; the waste part. The needle is sufficiently guarded, so a separate sharps container isn’t needed, but it does seem quite wasteful. I suppose recycling is an option (if my town accepts #5 recyclables), but then there’s the whole exposed needle problem.

NOTE: This is not intended to be a “how-to” guide for inserting Mio infusion sets. It is far from complete. Consult your manufacturer’s literature or media, your educator, or your trainer for details. Or be daring — but don’t rely on this post.