I’ve had a change of heart.  Awhile back, I wrote a rather popular blog post about the t:slim insulin pump, and why I felt it wasn’t right for me. This was based on published descriptions and a video glimpse of a pre-release model.  I said I’d stick with function over form, substance over style.

But then a bunch of other people got t:slims and started writing about them: in comments, in blogs, in tweets.  Meanwhile, Tandem diabetes had taken to social media in a big way, not only for self-promotion but in a truly interactive manner, answering questions and publicizing blogs about their product. They even came up with a new t:clip to replace the unpopular t:case. Most recently, we’ve learned that they’re deeply involved with JDRF in an Artificial Pancreas trial using a dual-cartridge mechanism that can deliver, presumably, insulin as well as glucagon.

Color me impressed. These folks never stop working and never stop innovating. Tandem, I was wrong about you.

Oftentimes, I find myself going back to that original post just to remind myself what turned me away from the device in the first place.  What I found is that my original concerns are pretty much non-issues at this point.  Let me elaborate.  (Excerpts from my original post are embedded below)

“First, the home screen.  We’ve seen it in pictures, and it’s beautiful ….  The problem is, it takes too long to get to it.  Unlike my Medtronic which always shows the time and the amount of insulin and battery-power I have left (albeit crudely), you need to slide a doohickey along the top to light up the screen.”

As Kari commented on that post, the important information is right there as soon as you press the button on top to “wake-up” the pump, prior to the 1-2-3 sequence. And by “important information”, that includes the Insulin-on-Board, which everybody seems to absolutely love.  In order to get the IOB on my Medtronic pump, I have to either press ESC twice and scroll through that awkwardly-placed list of information, or press ACT seven (yes, seven) times to go through the menu and bolus-steps where it (new to the Revel) tells me my IOB next to the part where I say how many units of insulin I want.  If it’s dark, I need more keystrokes to illuminate the backlight. 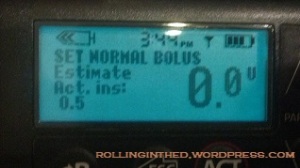 After pressing ACT on the Medtronic 7 times, the Active Insulin (IOB) becomes visible

By the way, I find myself using the backlight more and more lately, either by pressing the down arrow in the Medtronic “home” screen or by pressing the down-arrow and the “B” button simultaneously (two-handed operation!) if I’m in the middle of another operation. There are some keystrokes I hadn’t previously accounted for.

So, the home screen seems just fine to me. And as I’ve learned from my Contour NextLink meter, this type of display really doesn’t require a backlight anyway.

“Second, the t:slim seems to require two-handed operation.  I can do almost everything I want with my current pump with one hand (except change the battery or reservoir; that’s a given).”

Along with the two-handed operation comes a plethora of additional features that are easily accessible.  With the incorporation of the CGM, the Medtronic pump has gone from one “status” screen to three (one graph, two text), and finding stuff in that four-line display has proven quite awkward. So is scrolling through my old boluses, trying to figure out which time/date-stamp goes with which carb or BG number. All the data stored in my Medtronic pump has outgrown the display on which to view it – and that can be quite frustrating.  Then there are the layers upon layers of menus, going deep into one menu, then backing out of that to go into another menu. As I try to learn more about the advanced features of my pump, the ups-and-downs of menu navigation rival the ups-and-downs of blood glucose.  t:slim’s navigation seems much easier.

And I suppose using a finger on my left hand is better used to navigate a pump than to flip it the bird.

“And speaking of buttons, one of the nice things about buttons is that you can tell where they are without looking.”

And the reason I navigate without looking is because the buttons can be hard to find without light (the backlight only applies to the display, not the buttons). Hit the wrong button, and instead of clearing an alarm I just “Easy-bolused” half a unit.  Oops!

“I hate the USB.  Oh lord, how I hate those things…. physically they are about as brittle and annoying as they come.  After repeated plugging/unplugging, they become loose, and the cords become useless rather quickly…the mere presence of a port – a port of any kind – means an entry-point for water, and that can be deadly”

I’m still not a fan of the USB port, but I suppose I can accept it as an industry standard.  Proprietary ports are even more frustrating. I just hope that the USB that Tandem supplies is made out of something a little stronger than the flimsy aluminum that other devices use.  Also, some of the photos that Sugabetic shared in her post about charging the t:slim show cover that protects the USB port from water. I’ve still never seen it in person, but I do feel a bit better about it.

“the insulin is stored in an opaque container, so we have no way of knowing if there are any air bubbles until they make it into the tubing”

All I can say is that I’ve heard of no problems of air or anything other than insulin in the tubing (except for the odd Apidra occlusions.)

“It doesn’t talk to any sort of Continuous Glucose Monitor, and to my knowledge, not even a blood glucose meter.”

Well, having that IOB information front-and-center may lead me to use it more often and not stack boluses. I’m not sure how it’s calculated (if it’s a linear decrease from the time it’s delivered until the time it’s expired or if it fits some kinds of curve), but then I’m not certain how it works in my current pump either.

I’m hoping that big screen can give me a nice, easy-to-read summary of my previous boluses and my daily totals, and can help me navigate to what I want to do quicker.

A bigger, hi-res screen could separate one event from the next

Having profiles adjust the carb ratios and correction ratios is huge!  I find myself always needing more than is recommended at breakfast time, and even before bed. Whoever thought that an active versus a sedentary body would require different basal factors but identical bolus factors must have been oversimplifying things.  (There is also the monthly-cycle thing which, obviously, men don’t have to deal with).

I get the feeling that Tandem is kind of like Google. Always thinking and improving, and constantly rolling out tiny little improvements.  In contrast, Medtronic is like Microsoft: they have one big release, then it’s several years until the next “big thing”, but little to get excited about in between.  I’m excited about Tandem’s plans for the future, including their Dexcom-integrated, software-interfaceable, dual-cartridge pump. Medtronic’s plan for the future (as far as I know) is to sell something that’s already available in Europe to people in the States.  Quick and dirty, or slow and steady? The latter may be more reassuring, but the former is certainly more exciting.

Yes, the t:slim has some annoying quirks. All devices do. Part of the decision would be of sticking with a quirk I’m familiar with or trading it for one I’m not used to.

Of course, this entire post is moot. I’m not due for a new pump yet, and it’ll probably be a few years until I am. Will I be ready to leap over to the t:slim at that time? I really can’t say. There’s something to be said about the proven and established leader in insulin pumping. But will it be worth a close look? You betcha.

I’d especially like to thank the following blogs/bloggers for being among the first to try the pump, and for sharing their reviews, descriptions, and photos with the rest of the community. Your descriptions and enthusiasm have a big part in me changing my opinion of this new device: Sugabetic (Sarah), Sweetly Voiced (Melissa L), Life after Dx (Wil), Type 1 @18 (Melissa T).

Note: the opinions expressed, and my decision to express them, are purely my own. I received no requests, compensation, encouragement, threats, favors, or coffee (except that which I paid for) in connection with this post, nor do I expect any.