← Fantasizing with a dollar and a dream
Two pumps, revisited → 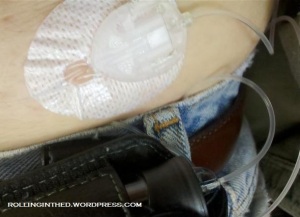 It looks like a pager. With a clear tube and some white sticky stuff.

Earlier this morning, I was on the train to Manhattan to install some radio equipment.  After finding the 1½ square-foot floor-space where I could (somewhat) comfortably stand during the duration of the trip, I pulled out my copy of Pumping Insulin and began reading Chapter 8.

“Are you wearing a pump now?” asked a colleague standing next to me?  (It would’ve been a much cooler story if it were a stranger, but I’m not one to twist the facts to make it more exciting).

“Is it big?” he asked as a follow-up question.  I pulled the pump from its case (made for a cell phone) and showed him.  He saw the tubing disappear beneath my shirt.   “That goes inside of you!?”  He started to squirm.

I lifted the corner of my shirt to show him the infusion site as he quickly turned his head away, but not so quickly that he didn’t see the white adhesive patch out of the corner of his eye.  He was really uncomfortable now.  “How could you let a doctor do that to you?”

Then came the words that I absolutely hate to hear.  On the list of things that should  never be said to a person with T1D, this one is worse than “Are you supposed to be eating that?” or “I heard that makes you go blind (or lose a leg)” or even “Oooohhh, that’s the BAD kind!”

Apparently, he’d rather die than give himself insulin.  No, that’s not my own conjecture, he came right out and said it.  If he gets diabetes, I’ve been instructed to throw him in front of the next approaching train.

I’m not so sure why those five words bother me so much.  It’s not like someone’s insulting me (it’s actually some twisted form of compliment).  It isn’t as if he’s throwing in the towel and giving up, since he doesn’t have diabetes to begin with.

As might be expected, my reply was a terse “You do what you have to do,” and that was pretty much it.  Despite my earlier eagerness to share and teach, I suddenly had no motivation to go into it any further.

No, his comment didn’t depress me.  As I’ve stated a few times before, I’m kind of proud of having diabetes.  It makes me feel empowered that the person who cares for me is ME.  My care is not left in the hands of my doctor, my parent, or a higher deity.  My diabetes care is all about me.  Believe it or not, it makes me stronger.

People are thrust into unexpected situations all the time.   Whether it affects ourselves or our families, whether it’s good news or not-so-good news, we just can’t predict how we’ll respond unless and until it really matters.  So when the challenge such as diabetes  presents itself, go ahead and find your motivation to handle it.  But don’t be dismissive when you’re not being challenged.  That reeks of laziness and apathy.  Don’t say you could never do that. That just pisses me off.

← Fantasizing with a dollar and a dream
Two pumps, revisited →